Swim Workout in the gym to increase swimming strength 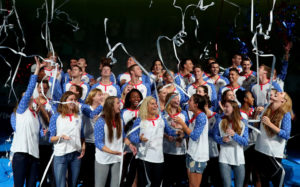 Continuing our weekly series of Olympic games workouts, what better to pick than a swim workout after watching the USA swim team dominate in RIO. How dominant? Olympic Gold record dominant with 16 Gold Medals, 8 Silver and 9 Bronze for a total of 33 medals! Absolutely amazing! Before jumping in to the swim workout, here’s some history on swimming competition in the Olympics.

Swimming has been in the Olympics from day one

Swimming has been a featured program of all editions of the Games since 1896. The very first Olympic events were freestyle (crawl) or breaststroke. Backstroke was added in 1904. n the 1940s, breaststrokers discovered that they could go faster by bringing both arms forward over their heads. This practice was immediately forbidden in breaststroke, but gave birth to the butterfly, whose first official appearance was at the 1956 Games in Melbourne. This style is now one of the four strokes used in competition, freestyle, breaststroke, backstroke and butterfly. Of the top ten multiple medal winners, 9 are Americans. Ian Thorpe of Australia is number 6. Michael Phelps has the most medals with 28 (23 Gold). 2nd place goes to Mark Spitz with 11. Phelps could have the most swimming medal of quite some time.

This swim workout won’t put you on the medal stand at the next Olympics in Tokyo but it will improve your swimming stroke and increase your strength and endurance. You will be performing 3 sets per exercise, 15 reps using a 3-1-1-1 tempo unless otherwise stated. Rest 40-50 seconds between exercises. Be sure the weight you are using allows you to complete all 15 reps but is not too easy to complete. The last rep should be difficult, requiring 90% of your strength to finish.