Gymnast strength workouts, won’t get you on the podium 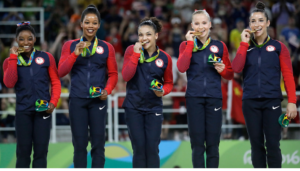 In the closing week of our Olympic workout series, I am going to publish 3 gymnast strength workouts this week in honor of the “final five” complete dominance at the Olympic games in Rio. These gymnast strength workouts focus on strength, speed, endurance and agility. Completing them will not put you on the podium, that will require a whole different dedication but they will help make you stronger.

Gymnastics history in the Olympics

Artistic gymnastics was introduced at the very first Olympic Games in 1896 in Athens. They has been present at every edition of the Games since then. At the beginning, it comprised disciplines that are difficult to qualify as “artistic”, such as climbing and acrobatics.

The foundations of the Olympic gymnastics program were laid at the 1924 Games in Paris. This is when the men’s apparatus individual and team competitions appeared. In 1928, women were included in the Amsterdam Games. It was not until 1952 that the women’s program was developed, with seven events, and then stabilized at six events as from the 1960 Games in Rome.

This discipline was mainly dominated by the Soviet Union from 1952 onwards, following the creation of the Russian Gymnastics Federation in 1883. At the 2008 Games in Beijing, it was the Republic of China’s turn to win the most gold medals. Of course, the 2012 and 2016 Olympics were dominated by the United States women’s teams.

Perform 3 sets of 12 reps for each exercise. You will take a 40 second break between each set. Use a tempo of 3-1-1-1 on all exercises. Be sure to move to the next exercise as quickly as possible. If you need more than 40 seconds of rest between sets, try hard not to go over one minute.