Fourth Of July Fun And Trivia Facts You Should Know 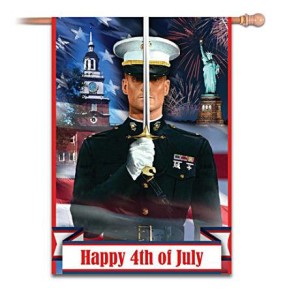 Happy birthday, America! I hope your 4th Of July includes beach parties, pool parties, picnics, barbecues, cold drinks and of course a great fireworks show to end the day. These are just some of the things family and friends get together to celebrate our Country’s independence. Of course many communities have parades and other ways to celebrate. While Congress chose to celebrate the 4th as our Independence day, the actual signing didn’t take place on the Fourth Of July. Below are some fun facts you may not know about our Nations celebration day.

1. The Declaration of Independence wasn’t signed on the Fourth Of July, 1776.
On July 1, 1776, the Second Continental Congress met in Philadelphia, and on the following day 12 of the 13 colonies voted in favor of Richard Henry Lee’s motion for independence. The delegates then spent the next two days debating and revising the language of a statement drafted by Thomas Jefferson. On July 4, Congress officially adopted the Declaration of Independence, and as a result the date is celebrated as Independence Day.

2. What day did most signers of the Declaration of Independence actually sign the document?

Most of the delegates signed on August 2, but several—Elbridge Gerry, Oliver Wolcott, Lewis Morris, Thomas McKean and Matthew Thornton—signed on a later date. (Two others, John Dickinson and Robert R. Livingston, never signed at all.)

3. Eight of the 56 signers of the Declaration of Independence were born in Britain.
While the majority of the members of the Second Continental Congress were native-born Americans, eight of the men voting for independence from Britain were born there. Richard Stockton, a lawyer from Princeton, New Jersey, became the only signer of the Declaration of Independence to recant his support of the revolution.

4. One president was born on the Fourth Of July

5. Three presidents died on the Fourth of July:

They were three of the first five presidents: John Adams, Thomas Jefferson and James Monroe.

6. Two additional copies have been found in the last 25 years.
In 1989, a Philadelphia man found an original Dunlap Broadside hidden in the back of a picture frame he bought at a flea market for $4. One of the few surviving copies from the official first printing of the Declaration, it was in excellent condition and sold for $8.1 million in 2000. A 26th known Dunlap broadside emerged at the British National Archives in 2009, hidden for centuries in a box of papers captured from American colonists during the Revolutionary War. One of three Dunlap broadsides at the National Archives, the copy remains there to this day.

7. It took over 100 years for the Fourth of July to become a legal federal holiday

First in 1870. Then, in 1938, Congress reaffirmed the holiday to make sure all workers received full pay.

8. The Declaration of Independence spent World War II in Fort Knox.
On December 23, 1941, just over two weeks after the Japanese attack on Pearl Harbor, the signed Declaration, together with the Constitution, was removed from public display and prepared for evacuation out of Washington, D.C. Under the supervision of armed guards, the founding document was packed in a specially designed container, latched with padlocks, sealed with lead and placed in a larger box. All told, 150 pounds of protective gear surrounded the parchment.

9. Is there something written on the back of the Declaration of Independence?

Yes!  “Original Declaration of Independence dated Fourth Of July 1776.” It’s not known who wrote it, or when.

When a Dunlop broadside was read by George Washington in New York City on July 9, 1776, the words so inspired the people listening that they started a riot. Later that day, they tore down a statueof George III, which was later melted and shaped into musket balls for the American army, according to the History Channel.

11. Fireworks were first used to celebrate the Fourth Of July in 1777

Congress chose fireworks as a way to celebrate the first anniversary. They were ignited over Philadelphia. The celebration also included bonfires and bells.

Do you have a fun fact about the 4th Of July? Please share in the comment section below.