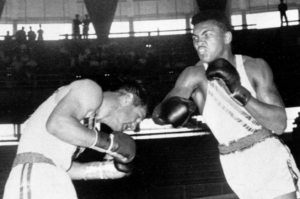 Continuing in our weekly Olympic sport weekly workout, this week I am choosing my second favorite sport, Boxing. This boxing strength and endurance workout focuses on power, speed and endurance. This will help increase your strength, agility and reactive speed to increase that knockout punch. This will be a 3 part workout, today focusing on strength, with endurance and power to follow over the next couple of days. First, a little history of Boxing and the Olympics.

Boxing In The Olympics

Boxing has been contested at every Summer Olympic Games since 1904 except the 1912 Summer Olympics in Stockholm, because Swedish law banned the sport at the time. Since the 2012 Summer Olympics, women’s boxing is part of the program. From the 2016 Summer Olympics, male athletes no longer have to wear protective headgear in competition, due to a ruling by the AIBA and the IOC that it contributes to greater concussion risk. Female athletes will continue to wear the headgear, due to “lack of data” on the effectiveness of it on women. Many American greats have started their career in Boxing by starring in the Olympics including Evander Holyfield, Pernell Whitaker, Oscar De La Hoya, Sugar Ray Leonard, Leon And Michael Spinks, Joe Frazier, George Foreman and of course the greatest of all time Mohammed Ali.

Boxing Strength and endurance Workout one

You will perform 12 exercises, 3 sets each with 10 reps per set. Use a tempo of 3-1-1-1 through unless otherwise indicated. Be sure to never sacrifice good technique to lift heavier amounts of weight. This can lead to injury.

In part two of this Boxing strength and endurance series, I will be posting a workout on how to build power. Please let me know how you liked this strength workout by commenting below!